The God Who Answers By Fire 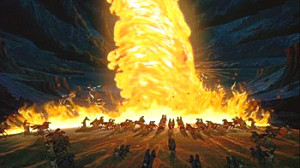 One of the criticisms often leveled at Christians is that we are negative, pessimistic, and worse, we don’t bring anything to the table by way of constructive ideas to resolve perplexing problems.  Our perceived negativity often leads to the charge that we are judgmental and hypocritical.  This is true in some instances, but only serves to highlight the message of our lives, namely that we all need a Savior.

Believers in Jesus Christ see the world through the lens of revealed truth (Scripture) and concern for God’s interests in this world. Jesus said that the greatest commandment was to love God and to love our neighbor as ourselves. Within these commands comes a lifetime of commitments that are often misunderstood or rejected by a watching world.

Marvin Olasky in his fine work, Standing for Christ in a Modern Babylon, gives a vital apologetic/defense before a culture that seeks to marginalize the Christian worldview. Olasky places the contemporary believer in a modern “Babylon” much like the Hebrew prophet Daniel experienced. Daniel seemed to thrive in an environment that was antagonistic to his faith, but nonetheless he stood courageously in the face of tremendous trials. Olasky writes to contemporary believers,

“The dramatic nature of Christ’s claims means that life as a Christian in Babylon is not boring. Christ’s statement, ‘I am the way,’ means that other ways are not, and that does not sit well with some. Christianity cannot be the live-and-let-live religion that goes down easily in a theologically laid-back society because Christians know that the reality apart from God is live-and-let-die. Christ’s claims inevitably force a reaction, either believing or hostile, just as He said they would.”

Sometimes a nation, a culture is so intoxicated by the fumes of its own hubris and deceptions that the only answer comes by fire. Such was the case in I Kings 18 in what was one of the most dramatic events in Holy Scripture. The scene is Mount Carmel. The officiating prophet is Elijah. The showdown in which the nation must decided is between:

Jehovah, the Lord God of Israel, Represented by the Prophet Elijah

On this day, Elijah called the nation to a decision, to an either/or moment, “Elijah came near to all the people and said, ‘How long will you go limping between two different opinions? If the Lord is God, follow him; but if Baal, then follow him.’ And the people did not answer him a word.”

The rules of engagement were given. The prophets of Baal would prepare a sacrifice and call upon their deity, which they did….all day, but “there was no voice. No one answered; no one paid attention.”

This humiliating silence was followed by Elijah who ordered that the sacrifice to Jehovah be saturated with water. Elijah prayed and “the fire of the Lord fell and consumed the burnt offering and the wood and the stones and the dust, and licked up the water that was in the trench. And when all the people saw it, they fell on their faces and said, ‘The Lord, he is God; the Lord, he is God.’” (For the full account, I Kings 18:17-40)

Some seventy years ago, Peter Marshall preached from the New York Avenue Presbyterian Church in the nation’s capital a sermon from this text.  Marshall thundered, “Millions of people in America live in moral fogs. They move in a sort of spiritual twilight. Modified morality; modified dishonesty is the practice of millions more. Surely the time has come for us to be honest about it…. Let us at least not be hypocrites. Yes, like the ancient Hebrew nation, America needs a prophet like an Elijah – a prophet who will have the ear of America and will say to her now:

Those who have ears to hear.

G. K. Chesterton once quipped, “The point of having an open mind is to close it on something solid.” Nothing is more solid than the claims of Jesus Christ. Nothing is more secure than the testimony of God’s word.  Nothing could be more clear than the teaching Jesus gave on a coming judgment.  Nothing gives more hope than the future offered by Christ (John 14:1-6).

On a particular Sunday,  one preacher spoke on the coming judgment to his congregation.  At the close of the worship service, the pastor was greeted at the door by a man who said in an irritated tone, “I come to church to be comforted, and you sound like a fire alarm!” To which the preacher responded, “Maybe that is because there is a fire.”

Jesus’ sacrificial death has built a timeless bridge between a fallen humanity and a holy God.  Through his finished work, Christ has become what John Piper calls, “The asbestos righteousness that wraps us up in love so we can enjoy the blazing heat of God’s holiness and not be consumed by it.”  What a wonderful deliverance and an unspeakable blessing, but be assured of this, it is a call that demands a response of faith and obedience.

« Let’s Play Stump the Counselor
The Hand of the Lord »