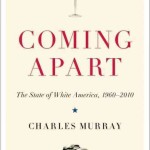 Coming Apart: The State of White America, 1960-2010 by Charles Murray is a fascinating and sobering cultural analysis of the last 50 years in the United States.  Written from a socially conservative, libertarian perspective, Murray argues that “our nation is coming apart at the seams—not ethnic seams, but the seams of class. ( p. 273)

Murray articulates the civil religion manifesto clearly, “The American project…consists of the continuing effort…to demonstrate that human beings can be left free as individuals and families to live their lives as they see fit, coming together voluntarily to solve their joint problems. The polity based on that idea led to a civic culture that was seen as exceptional by all the world. The culture was so widely shared among Americans that it amounted to a civil religion. To be an American was to be different from other nationalities, in ways that Americans treasured. That culture is unraveling.” (p. 12)

With great precision, Murray charts the disintegration of “founding virtues” that have made America exceptional among the nations of the world. He identifies four virtues that were emphasized by the founders’ of this country and consistently present through the ebb and flow of American history into the 1960’s. However, from the 1960’s to the present, Murray presents research that shows that something catastrophic has happened in the last fifty years.

He writes favorably about evangelicals while not being one. He also writes with moxie in his observation of the liberal elite, “When you get down to it, it is not acceptable in the new upper class to use derogatory labels for anyone, with three exceptions: people with differing political views; fundamentalist Christians, and rural working-class whites.” (p. 294)

The founding virtues considered by Murray are: Marriage, Industriousness/work ethic, Honesty, and Religiosity. I believe evangelicals would give universal appreciation to Murray’s handling of the data for each of these categories because they rest on biblical principles.  For example, consider the following statements for each of these virtues:

“Children need fathers, and the next generation in a community with lots of children without fathers are in trouble.” (p. 214)

“For many years, I have been among those who argue that the growth in births to unmarried women has been a social catastrophe. But while those of us who take this position have been able to prove that other family structures have not worked well as the traditional family, no one has been able to prove that alternatives could not work as well. And so the social planners keep coming up with the next new ingenious program that will compensate for the absence of fathers.” (p. 303)

“Social democrats may be able to design some outside interventions that do some good. But they will have to stop claiming that the traditional family is just one of many equally valid alternatives. They will have to acknowledge that the traditional family places a special, indispensable role in human flourishing and that social policy must be based on that truth.” (p. 304)

With the early growth of this country, “American industriousness fascinated the rest of the world.  No other American quality was so consistently seen as exceptional.” (p.135) Murray documents the nosedive in the work ethic particularly among young males and the increase of government dependents to support one’s livelihood.

With marriage taking a hit over the last 50 years because of divorce and ever increasing cohabitation, Murray argues that these trends affect the industry of young men.  He writes, “The responsibilities of marriage induce young men to settle down, focus, and get to work.” (p. 186).

The founders believed that it was self-evident that “nothing short of a police state will force people to refrain from crime if they are predisposed otherwise, and an assumption that people will follow the rules is indispensable for making a free market work.” (p. 136)

Quoting Thomas Jefferson who said, “Honesty is the first chapter in the book of wisdom.” (p. 136)  The founders understanding of honesty was “doing the right thing not because the law will put you in jail if you don’t, but because of moral principles that you follow regardless of consequences.” (p. 198)

Murray shares an encounter Thomas Jefferson had when a critic called him hypocritical. On one particular Sunday, Jefferson walked to church with a prayer book under his arm. Jefferson responded that “no nation has ever yet existed or been governed without religion. Nor can be. The Christian religion is the best religion that has ever been to man and I as chief Magistrate of this nation am bound to give it the sanction of my example. Good day sir.” (p. 143)

With each of these founding virtues, Murray describes the rapid departure from these ideals that were commonly held, regardless of the class, and which united the people of this country. He describes an ever growing divide between the upper class and the lower class in American culture. In essence, we have become a divided, unraveling nation.

If one of the criteria for a good book is to make you think, then this work by Charles Murray was exceptional.  His historical and cultural analysis is stellar, and his writing style is brilliant and engaging.

While I agree with many of Murray’s conclusions about the way things are, the book offers little hope or remedy to the present malaise.  To his credit, he never claimed to answer the “why” question, but identifying a problem without a solution is hollow in my mind. He seems to brush up against the merits of a civil religion, but that message does not deliver especially in the fragmentation of American culture.  Our hope will never be in a generic, civil religion irrespective of past nostalgia. The problems we face as a nation are pronounced and beyond human stratagems and slogans.

In this vacuum, the Church has been given the message of the ages and what is needed is a spiritual great awakening.  We need a move of God where hearts are changed and we are brought together by the life God gives. A life in which we begin to love what God loves through the power of Jesus Christ within us. This has happened before in the history of our country, and may the Lord be pleased to do it again.

In closing, Charles Murray’s work offered a reminder to me that judgment begins with the household of God. (I Peter 4:17) This is an hour for the church to come to terms with our sin and apathy, and once again present ourselves to God for Kingdom work.  If the Gospel is our hope, we must press forward with obedient lives that are worthy of His calling. (Ephesians 4:1-3)

« Are You a Spiritual Flexetarian?
A Journey with Thanksgiving »