Though He Was Rich, Yet For Our Sake He Became Poor 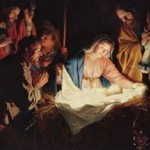 In this Christmas season, once again the question of the ages is, “Who was the baby in the manger?” If he was in fact God in human flesh, and his life was lived in the monumental way in which it was lived, what are we supposed to do with that information? The Apostle John wrote his gospel to answer that question:“so that you may believe that Jesus is the Christ, the Son of God, and that by believing you may have life in his name” (John 20:31,32).

God took on human flesh and dwelt among us and his glory was seen by a multitude of witnesses. The brief life of Jesus Christ was captured in four inspired and authoritative books named for the authors who penned them: Matthew, Mark, Luke, and John. From these four perspectives, we receive a composite of the life and work of Jesus Christ. These accounts were written not so we would remain neutral on the question of Jesus, but for the expressed purpose that we might believe that he was the long awaited Messiah, and that by believing we might have salvation and hope in his name.

Some years ago Philip Yancey, in his book The Jesus I Never Knew, contrasted the humility that characterized Jesus’ royal visit to planet earth with the prestigious image associated with world rulers today. Yancey wrote:

Queen Elizabeth II had recently visited the United States, and reporters delighted in spelling out the logistics involved: her four thousand pounds of luggage included two outfits for every occasion, a mourning outfit in case someone died, forty pints of plasma, and white kid-leather toilet seat covers. She brought along her own hairdresser, two valets, and a host of other attendants. A brief visit of royalty to a foreign country can easily cost twenty million dollars…

In meek contrast, God’s visit to earth took place in an animal shelter with no attendants present and nowhere to lay the newborn king but a feed trough. Indeed, the event that divided history, and even our calendars, into two parts may have had more animal than human witnesses. A mule could have stepped on him.

While the earthly poverty of Jesus was extreme as Christ himself stated that “foxes have holes, and the birds of the air have nests, but the Son of Man has nowhere to lay his head” (Luke 9:58), his earthly poverty pales in comparison to the whole reality of the incarnation, namely God taking on human flesh. This would rank as the greatest condescension in the history of the world. Such a journey would be the ultimate mission trip to an unreached people.

The radical poverty of the incarnation was described by the Apostle Paul in 2 Corinthians 8:9, “For you know the grace of our Lord Jesus Christ, that though he was rich, yet for your sake he became poor, so that you by his poverty might become rich.” The incarnation remains the most breathtaking moment in human history for those who believe. It becomes the lens by which we view the world and our hope with the unfolding of history. Another Christmastime has come and with it another call for songs of loudest praise:

O come, let us adore Him,

O come, let us adore Him,