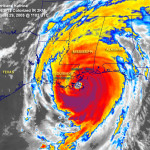 On Sunday, August 28th 2005, the First Baptist Church Gonzales, La.  gathered for worship with a foreboding outlook on the next 24 hours. As we closed the worship service, I addressed the congregation by stating the obvious, namely that the radar and forecast were troubling, and that we should make final decisions regarding the storm. My last comment was one leading to a closing prayer for God’s protection and provision, I shared with our church that Katrina promises to be a future pseudonym for disaster, and I am confident that it will change south Louisiana in a very profound way. I challenged our people that with such destruction coming our way, we could count on unprecedented opportunities for ministry.

For five hours on Monday, August 29, Hurricane Katrina battered the major Gulf Coast cities, and when all was said and done there were 1833 deaths and $108 billion dollars in damages.  Douglas Brinkley in his comprehensive and impressive chronicle, The Great Deluge: Hurricane Katrina, New Orleans, and the Mississippi Gulf Coast,  writes, “The storm-surge flooding, which submerged a half million homes, creating the largest domestic refugee crisis since the Civil War. Eighty percent of New Orleans was under water, as debris and sewage coursed through the streets, and whole towns in southeastern Louisiana ceased to exist.”

Gonzales, being some 60 miles west of New Orleans along the route of Interstate 10, would escape the higher winds and the devastating flooding of our friends in New Orleans.  By being one of the first major exits on I-10 west out of New Orleans, Gonzales became a city of refugee for many fleeing Katrina.

The week following Hurricane Katrina seemed apocalyptic to me.  Our community swelled to twice its population and the infrastructure was unable to accommodate the surge of humanity. I remember going into Walmart the week after the storm and seeing the produce department virtually empty.  The line to check out was 150 feet long and 45 minutes before you could check out.

Our community did have tremendous opportunity to minister to thousands of people. The storm brought a connectedness that was remarkable as local government, volunteer organizations, and churches banded together to meet pressing needs.  It was overwhelming to receive support from around the United States.

I will always be grateful for ministry partners who sent significant financial gifts and entrusted us to invest these resources on the front line of human suffering. And invest these resources we did as the Lord gave to us an open door of ministry to over 450 people in the two months after the storm. Those who came to FBCG for assistance were taken aside where we could talk with them about their physical needs and share with them the Good News of Jesus Christ.

FBCG became a clearinghouse to put resources and hope into the lives of hundreds. The stories of those brought to us from New Orleans, and the surrounding area, will always be etched in my mind. Like the man from St. Bernard parish who said to me in tears that his wife had insisted that he put an axe in his attic prior to the storm. He told me with great emotion that he was so glad he listened to her or they would have drowned in their home. His only way of escape was to chop through his attic roof, and from their roof they were rescued by boat.

There was also a woman who spoke for many when she said to me after losing her home and business in floodwaters, “Why did God have to do this?” We talked about her questions as she was in the initial stages of processing the grief. She was open to hear the Gospel and that the God of the Gospel is not ignorant to suffering, but in fact, through the work of His Son Jesus Christ, has given us every reason to hope in Him. She said to me at the end of our lengthy conversation, “I never looked at it like that before. It sure could be worse. I am so thankful that I am alive.” With a smile I said, “Me too.”

A decade has come and gone since Katrina wiped out a region of our country. In reflecting upon those days and weeks after the storm, it was a season of sorrow and loss, but one of redemption and new beginnings. It seems like God is always bringing us through these great realities of life.

The trauma associated with Hurricane Katrina brought the hope of Habakkuk’s benediction to mind,

“Though the fig tree should not blossom And there be no fruit on the vines, Though the yield of the olive should fail And the fields produce no food, Though the flock should be cut off from the fold And there be no cattle in the stalls, Yet I will exult in the LORD, I will rejoice in the God of my salvation.  The Lord GOD is my strength, And He has made my feet like hinds’ feet, And makes me walk on my high places…”  ~Habakkuk 3:17-19

Based upon that glorious declaration,  I rejoice today in the God of my salvation.

« Life is Short, Don’t Have an Affair
Reflections on 22 Years With the Same Congregation »