The Gates of Hell Will Not Prevail 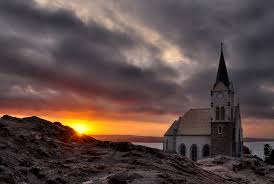 When our church celebrated our 100thyear anniversary, I discovered that we were constituted around the same time as Harley Davidson, United Parcel Service (UPS), Blue Bell, Walgreens, and Kelloggs. In thinking about our local congregation compared to these corporate giants, I was taken by the contrast in purpose.

Jesus Christ commended Peter when he made the great confession in Matthew 16. On that occasion Peter declared to Jesus, “You are the Christ, the Son of the living God.”  In turn, Jesus said, “Blessed are you, Simon Bar-Jonah! For flesh and blood has not revealed this to you, but my Father who is in heaven. And I tell you, you are Peter, and on this rock I will build my church, and the gates of hell shall not prevail against it.”(Matthew 16:17,18)

Jesus pledged to build His church in this world, and that it would be indestructible. The Apostle Paul spoke of the church as “the pillar and support of the truth.” (I Timothy 3:14,15)  In fact, in reference to the church, the language of the New Testament is exalted with regard to its purpose and role within God’s plan for the ages. (Ephesians 1-3)

However, this is not the view many possess of the church. A local church is often portrayed as a lethargic, pathetic gathering which is relegated in the minds of many to be a place where you might get married or buried. It’s a place for old people to gather, and they do so out of a duty-bound allegiance to keep the club going. From this perspective, thoughts of church life exploding your soul or changing your life are slim indeed.

Reading the New Testament offers a much different view. I would contend that the church is the only institution called into existence to deal with the ultimate issues: life and death, forgiveness, reconciliation, heaven and hell, relationships, purpose in living, and true community.

On our church’s centennial celebration, I thought of our local Body compared to the corporate giants mentioned above. Interaction with these companies would be much different than a fellowship connection with a local church. For example, you wouldn’t walk into a Harley Davidson dealership and say to the salesman, “I’ve got cancer and the doctor says that I only have a few months to live, would you have the company pray for me?”

You wouldn’t say to the Blue Bell Ice Cream truck driver, “Hey pull over, my family’s really hurting can you help us? Ice cream is nice, but we have deep issues, could you help us walk through these trials?”

You wouldn’t contact Kelloggs and say, “I know you are into Corn Flakes, but I was wondering what your plan is to reach the unreached people of this world with the Gospel, and how we could be a part of that mission?”

You wouldn’t go to the Walgreens Pharmacy and ask, “Do you have any medicine that will give me abundant life and life beyond the casket?  The Scripture tells me that I have an appointment with death, and then the judgment, I was really wondering if you had something that would bring peace to my soul and reconciliation with a holy God as I face these realities?”

I am not speaking disparagingly of these companies, but their purpose is to sell motorcycles, ice cream, corn flakes and provide prescriptions. They do not exist to point to eternal realities.  However, this is precisely what the church is commissioned to do by Christ Himself.  The Church is charged with proclaiming the life, death, and resurrection of Jesus to this world, and those who gather under the banner of His grace are to become an oasis of grace called a local church.

I know, the church isn’t perfect. If you are a part of one, you know it is not perfect. I am also aware that the church has not always modeled its message, both within the ranks, as well as to the world.  Nevertheless, God intends every believer to be united in the fellowship of a local Body. The prevailing assumption and example in reading the New Testament is that believers are connected with a local Body. That is an attitude that must be recaptured in the minds of every Christ-follower.

Mark Dever has impacted my ecclesiology more than anyone. He once shared a conversation he had with a distant relative. His mother wanted him to meet this relative that he hadn’t seen in a long time, and so they met up at this one place, and the conversation was going along wonderfully until his mother mentioned that he was a pastor of a local church.  At which time the conversation evaporated. This relative looked very nervous and uncomfortable all of a sudden. Her coffee became a lot more interesting.

She said, “Oh, local church huh? I really don’t have much time for organized religion.”

He said, “And do you think the world outside is really so much better?”

And Dever said, “Well, you know you might be surprised how much I agree with you.  I’m a Christian. I know a bit of what it is like to not be a Christian and to be a Christian.  I know the world outside is a pit of vipers. I have no doubt about that, but I also know that the church is a pit of vipers too. I know that. I would never be involved in a church which didn’t know that. I think the only difference, where we disagree, is I don’t think those outside know it, and I think the ones in the church know it, and that is why we are there. And you know what? If you ever want to, you are welcome to slither on in anytime.  We’ve got room.”

When we receive the Lord Jesus Christ by faith, we enter a relationship in which we begin to love what He loves. I love the church not because it is perfect. I love the church because in reading the New Testament, nothing could be more clear than Paul’s words to the Ephesians, “…Christ loved the church and gave himself up for her.” (Ephesians 5:25)

There is something very comforting to me to unite with other believers in a covenant relationship as a local church.   With such a commitment in my life, I am not aligning with something that was founded in the recent past. On the contrary, I am joining millions through the centuries who have gone before in declaring allegiance to the King of kings and Lord of lords.  I know we are part of a movement in which the gates of hell will never prevail and will indeed accomplish all God intends ending in His very presence.

« He is Able
Your Cell Phone and the Christian Life »