The Paradox of the Christian Life 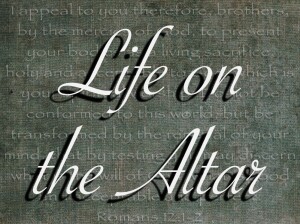 Deitrich Bonhoeffer was a German pastor martyred in a Nazi concentration camp in 1945. His death came by hanging in the gallows a few weeks before Germany’s unconditional surrender in World War II. Through his writing, Bonhoeffer warned against “cheap grace” which he described as “preaching forgiveness without requiring repentance….grace without discipleship, grace without the cross,…grace without Jesus Christ.”

Perhaps one of the most arresting statements Bonhoeffer made was in regard to the cost of discipleship, “When Christ calls a man, he bids him come and die.”  Bonhoeffer’s words echoed the strong demands given by Jesus in the gospels, “If anyone would come after me, let him deny himself and take up his cross daily and follow me.  For whoever would save his life will lose it, but whoever loses his life for my sake will save it.” (Luke 9:23)

Those who heard Jesus teach understood that he was referring to a radical call of self-denial, including actual death, in the pursuit of following him as his disciple. The demands of discipleship require a daily, moment-by-moment surrender of our goals and aspirations in order to live for Christ.  A perusal of the New Testament, as well as church history, reveal that this includes potential rejection, betrayal, mistreatment, severed relationships, the rage of crowds, physical mistreatment, and even a martyr’s death. (2 Corinthians 11:23-28; Acts 7:51-60)  Jesus defined discipleship as bringing every area of our lives under the umbrella of his Lordship. Far from our best life now, to follow Jesus Christ is a call to live for him and to be willing to die for him, “So then, whether we live or whether we die, we are the Lord’s.” (Romans 14:8b)

The New Testament writers were unified in their message that if we would know Christ in a saving relationship, there was no getting around the complete presentation of ourselves to God through denying ourselves, taking up our cross, and following Christ in obedience through the life we live.

In the gospel accounts, we find a number who were either disgusted by the demands Jesus gave, or they left his presence sorrowful because they loved their life more than the prospect of following him. To be clear, we will never achieve complete obedience to Christ in this life. We will continually want to crawl off of this altar of obedience for offerings that are less demanding. However, true assurance of salvation is extended to every believer whose hope is in Christ alone, and in turn who live surrendered to him as the trajectory of their life.

Paul presents the call of discipleship with a different word picture in Romans 12.  He uses temple language when he calls the Romans (and every believer) “to present your bodies a living and holy sacrifice, acceptable to God, which is your spiritual service of worship.” (NASB)  Paul describes the walk of faith as one that is lived on the altar before God. Not as a means to pay for anything. We could never offer atonement for ourselves. Paul is speaking of a living sacrifice made possible because of what Christ has accomplished through his life, death, and resurrection.

The Paradox of the Christian life

The Bible presents some challenging paradoxes on a number of different doctrines. A paradox is a statement that appears to be a contradiction but is nevertheless true. For example, the biblical teaching on prayer is paradoxical because the Bible affirms that God knows the outcome of all things. (Isaiah 46:10; Psalm 139:16) Furthermore, he knows our need even before we ask (Matthew 6:32), and yet we are still commanded to pray (Luke 18:1; Philippians 4:6,7; I Thessalonians 5:17). This seems to be contradictory, but prayer is nevertheless the means God has established to fellowship with him, and receive from his gracious hand.

The doctrine of Scripture is also presented as a paradox. Did God write the Bible? Or human writers?  Or the Holy Spirit? (2 Timothy 3:16; Galatians 6:11; 2 Peter 1:21)? Well, each of these claims is true, and these truths flow together to help us form a deeper understanding of the God-breathed text of the Bible.

We could also point to the crucifixion of Christ as a paradox. In Acts 2:23, Peter is preaching his Pentecostal sermon in Jerusalem, and he references the crucifixion of Jesus which occurred six weeks earlier in that very city. Notice, how he describes it to the crowd gathered for this feast:

“This Jesus, delivered up according to the definite plan and foreknowledge of God, you crucified and killed by the hands of lawless men. God raised him up, loosing the pangs of death, because it was not possible for him to be held by it.”

So, according to Acts 2:23, who crucified Jesus? Was it God? Pilate? The Romans soldiers? Herod? The Jews gathered in Jerusalem at that time?  Well, each was responsible for Jesus’ death. I believe this is a helpful example of how a sovereign God accomplishes his purposes in a world of human beings exercising choices.  In the paradox of the crucifixion, Pilate was doing what he wanted to do, namely shirking  any responsibility for Jesus’ case. Herod was doing what he wanted to do. The Romans were doing what they were trained to do. The Jews were expressing what they wanted done, namely that Jesus would be put to death. And all the while, God accomplished what he wanted done through the crucifixion of his Son.

As we move to the paradox of the Christian life expressed in Romans 12, Paul described a crucified life. James M. Boice referred to this as “life-by-dying,” or “dying, we live.” Boice continued by saying, “What Paul is saying is that we have already died to sin in the sense that we cannot successfully return to our old lives. Therefore, since that is true, we might as well get on with the task of living for the Lord Jesus Christ.  We need to forget about sinning and instead present our bodies as ‘living sacrifices’ to God.’”

Paul described such a paradox and life to the Galatians, and he did so in the first person, “I have been crucified with Christ. It is no longer I who live, but Christ who lives in me. And the life I now live in the flesh I live by faith in the Son of God, who loved me and gave himself for me.” (Galatians 2:20) Here Paul speaks of the Christian life as a cross-centered life which captures both the living and dying aspects of what it means to follow Jesus.

Romans 12:1 presents a paradox of a living sacrifice. The sacrifice in Paul’s world as a Jew were dead, but for those walking by faith in Jesus Christ, their sacrifice is a living sacrifice continually offered to God with full understanding that we are not our own, and that we have been bought with a price, and for that reason we are to glorify God with our body. (I Corinthians 6:19,20)

In Lubeck, Germany etched inside the cathedral is this message, which I think communicates powerfully the authority of Christ’s Lordship and our call to obey him:

Thus speaketh Christ our Lord to us,

You call Me master and obey Me not,

You call Me light and see Me not,

You call Me the way and walk Me not,

You call Me life and live Me not,

You call Me fair and love Me not,

You call Me rich and ask Me not,

You call Me eternal and seek Me not,

If I condemn thee, blame Me not.

« The Mercies of God
Take My Life and Let It Be »